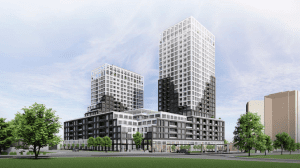 We’ve updated this post with site plans, recommendations reports and elevations for the Bristol Road East and Hurontario and  30 Bristol Road East Projects. The PDF’s below offer some insight into this exciting project…

The following article is excerpted from insauga.com, Sep 25, 2018

It’s no secret that housing has become increasingly more expensive in Toronto and the GTA, with detached houses typically costing buyers in Mississauga and surrounding cities between $800,000 and $1 million (often more) and condos—even modestly-sized two-bedroom units—running buyers over $500,000.

With wages failing to keep up with soaring real estate values (and with renting becoming increasingly more costly as homes become more valuable), a lot of lower and middle-income earners have been locked out of the real estate market entirely. Those who have managed to rent or purchase homes in the city are often paying well over 30 per cent of their household income on shelter costs.

For that reason, residents might be pleased to hear that a brand new affordable housing development recently broke ground in the Malton area of Mississauga.

Late last month, Habitat for Humanity Halton—Mississauga, City of Mississauga and Region of Peel staff and officials hosted a groundbreaking ceremony to celebrate the launch of the Bristow-Law Build Project.

The property, located at 3073 Merritt Ave., was purchased for a toonie. Once home to a fire station, the land has since undergone a rigorous clean-up process and will soon to be transformed into four new homes for local families in need of an affordable place to live.

“The process from paying the city a toonie to now took about three years,” says John Gerrard, CEO of Habitat for Humanity Halton—Mississauga.

“[Councillor Carolyn Parrish] came to us and said ‘I think I can get you some land. There are some issues, you’ve gotta work through those issues,’ and we did.”

Categories: In The News, News