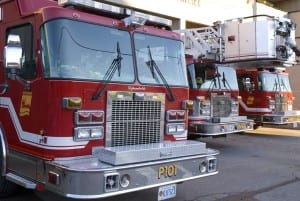 Give them one week and Mississauga Fire and Emergency Services (MFES) will show 20 teenaged girls, ages 15 to 19, what a career in fire service could look like through the new program Camp Ignite.

“Diversity in our fire service is an extremely important issue for us. It’s essential that residents are able to see themselves in the crews that are proudly serving their City,” said Tim Beckett, Fire Chief, MFES. “We are encouraged that women are applying to the fire service but it’s not happening in the numbers that it would take to make a significant difference and we want to change that.”
The camp is being led by the City’s first female firefighter, Shelli Varela. Varela joined MFES in 1994 and was later promoted to the position of captain in 2008.
“Girls often don’t have that same natural connection to firefighting that young boys frequently embrace,” said Varela. “Because the connection isn’t there, girls generally don’t investigate a career in firefighting. With Camp Ignite, we want to show young women that firefighting isn’t just possible but could be the ideal path for them.”
During the week, girls will learn a diverse set of skills including:

Who:
Teenaged girls ages 15 to 19 working with members of MFES

Cost:
The cost of Camp Ignite is $150. Participants will require steel toe boots to take part in fire ground activities.

How to Apply:
The application form can be found here. Applications will be accepted until Wednesday, June 15, 2016.