City Prepared to Clear the Way this Winter 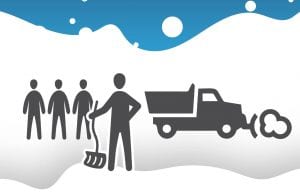 The City of Mississauga is ready for winter. Our winter crew is ready with 377 pieces of equipment to clear 5,600 lane km of roads; 1,400 lane km of priority sidewalks; 3,700 bus stops and over 1,000 pedestrian crossings.

What we clear when:

A winter on-street parking restriction is in effect in Mississauga from November 1 till March 31 between 2 to 6 a.m. Vehicles left on City streets will be enforced in accordance with the Traffic By-law. During snow removal, temporary parking permits will not be issued and current ones will be suspended.

For Updates and Information: