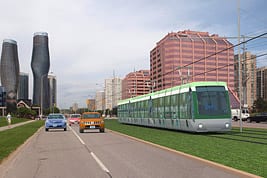 Today, Council provided their endorsement for Mississauga’s top priority rapid transit projects. During last week’s General Committee, staff presented a report on the Transit Initiatives and Priorities for the City of Mississauga and gave an update on transportation initiatives currently underway.

Identified as the City’s top priority rapid transit projects were the:

“Mississauga is a city committed to building transit and investing in our future,” said Mayor Bonnie Crombie. “We know that in order to build a 21st century city, we need to be able to move people and goods efficiently and effectively. These transit initiatives and priorities will help ensure residents, visitors and commuters have access to improved regionally-integrated public transit.”

“Mississauga is experiencing a turning point in the development of its transportation system from reliance on a road network that is largely built out, to establishing more sustainable ways to move people in the form of transit, cycling and walking,” said Geoff Wright, Commissioner, Transportation and Works. “The transit priorities endorsed by Council focus around high-growth locations like Mississauga’s downtown, along the Hurontario corridor and around the waterfront where we’re able to make key connections with other transit operators.

Wright further explained that in addition to current transportation and transit projects underway, the City is also undertaking its first Transportation Master Plan to shape the city’s transportation system now until 2041; laying out the City’s long-range strategy for investment in and stewardship of transportation services and infrastructure.

“From a financial planning perspective, it’s important to have our transit and transportation priorities identified,” said Gary Kent, Commissioner of Corporate Services and Chief Financial Officer. “This allows us to effectively plan and allocate resources in our capital budget and throughout our budget and business planning process. It also puts the City in a better position to take advantage of transportation and transit infrastructure funding programs when they come forward from other levels of government.”

For more information on the City’s transit initiatives and priorities, visit: Building Transit in Mississauga.