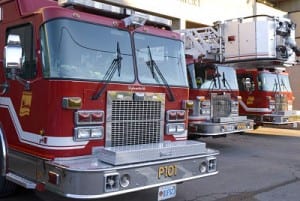 Keeping residents safe is the primary goal of Mississauga Fire and Emergency Services. In order to do this, we strive to meet an established level of service, which includes a four-minute response goal for an emergency vehicle to reach a fire or medical emergency after a 911 call. One area where we were slipping above this ideal time is the area around Eglinton Avenue and Fairwind Drive.

The City had designated the southeast corner of Eglinton and Fairwind as parkland, with plans to build tennis courts, a basketball court and soccer field. Fire and Emergency Services came to me this summer with a proposal to convert part of the proposed park to a new fire station for the community. The original plans had a station which exited onto Fairwind Drive, and which shared parking with the park. The proposal had a price tag of $6.2 million.

I requested that they come back with a second proposal, which would move the fire station away from Fairwind Drive with an exit onto Eglinton Avenue. This plan requires turn lanes on Eglinton, an added traffic signal and extended utility costs – adding $1.1 million to the original price tag.

This summer, I sent a letter to the residents of the surrounding community who would be most impacted by the fire station to get their opinion – is it better to keep the fire station traffic on the busy throughfare at a higher cost? Or run fire trucks through a residential neighbourhood to save money?

Nearly 90 per cent of residents responded that they’d prefer the station exit on Eglinton, despite the higher cost.

This fall, the proposal for the fire station will be before council. I’m confident that your voices will be heard and that the second proposal, exiting onto Eglinton Avenue, will be accepted for the community.