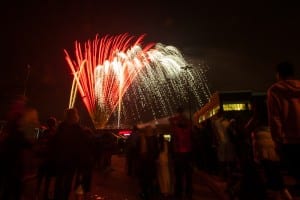 At today’s Council meeting, a temporary exception was made to the City’s fireworks-related by-laws. The approved exception now allows fireworks to be set off during Diwali (November 10 to 11*, 2015) and Chinese New Year (February 8, 2016) for a period of one year starting on November 1. Council requested that Mississauga Fire and Emergency Services (MFES) put together a report that looked at the feasibility and impact of allowing residents to use fireworks on Diwali and Chinese New Year.

“Although fireworks account for less than one per cent of the fires in Mississauga, we want to ensure that there is minimal impact to the safety of residents,” said Fire Chief Tim Beckett. “The one-year exception will be in place until November 2016. Over the next few months, staff will meet with the City’s Diversity and Inclusion Advisory Committee (DIAC) to ensure the celebrations of our diverse community are recognized yet maintain public fire safety as a priority.”

On September 16, a request was made at Council to amend all by-laws associated with the setting off of fireworks displays to make an exception for both Diwali and Chinese New Year celebrations. Prior to the exception, relevant by-laws only allowed fireworks to be set off during Victoria Day and Canada Day unless a permit had been issued by the City’s Fire Chief.

Mississauga residents are reminded that:

For more information about the City’s Fireworks regulations and what residents should know when using fireworks, please visit: mississauga.ca/portal/residents/fireworksregulations.

*Correction* An earlier version of this release stated that the exception allowed fireworks after November 11. This was incorrect. With apologies for any inconvenience.