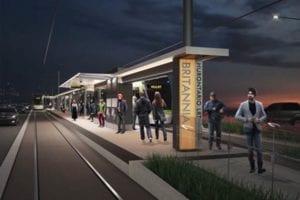 City of Mississauga staff reported to General Committee today on the Hurontario Light Rail Transit (HuLRT) Project. The project, led by Metrolinx, is moving into the next phase of the procurement process. Included in the report, is a staff proposal for additional design refinements and corridor enhancements that go beyond the initial project scope.

“We are excited to reach this next stage of the Hurontario Light Rail Transit Project,” said Mayor Bonnie Crombie. “The design refinements and enhancements staff brought forward are placemaking opportunities that link to key downtown destinations to achieve a civic identity and sense of place. The proposed additional municipal infrastructure is an opportunity to complete work efficiently and good use of our resources. The Hurontario LRT is building and connecting our city and ensuring it remains competitive and offers our residents efficient and modern transit.”

The City of Mississauga has been working with Metrolinx on refining the reference design to address localized concerns prior to the next phase of the procurement process.

“Before Metrolinx and Infrastructure Ontario identify a successful bid team, an agreement will need to be in place with the City of Mississauga to address the detailed aspects of project delivery and long-term operations,” said Joe Perrotta, Director, City of Mississauga LRT Project Office.  “The additional municipal infrastructure being proposed can be integrated with the overall procurement process.  Separate budget approvals will be required through the 2018 Budget.”

The design refinements and proposed corridor enhancements include:
• Review of the Port Credit and Cooksville HuLRT stops to improve integration opportunities to the GO rail network
• Maintaining paid on-street parking in the Downtown Mississauga areas with the HuLRT, where appropriate
• Developing an enhanced corridor design for Duke of York Boulevard in addition to reconfiguring the track design to a centre roadway configuration
• Addressing constraints at the Highway 403 crossing with the proposal for a new separated HuLRT structure
• Maintaining additional on-street MiWay capacity at the City Centre Transit Terminal
• Ensure consideration for a context sensitive design adjacent to the Britannia Church and the Britannia Farm Lands

Metrolinx identified a Public Realm Amount (PRA) of approximately $10.6 million to be used towards enhancements for the Hurontario corridor in Mississauga. The City of Mississauga capital budget also identified up to $25 million in funding for related HuLRT project enhancements beyond the scope of the project. Departmental staff, working through the Metrolinx design process, have used this opportunity to identify and evaluate potential corridor enhancements and upgrades that would benefit the overall project and communities. These enhancements have been assessed and prioritized for Council to endorse and include in the Metrolinx procurement process. With a set commitment on funding, the City will not be held responsible in case of project overruns. The staff report, Hurontario Light Rail Transit Project Update: Metrolinx Project Procurement, includes $1.61 million in additional funding. Final approval of the staff report will be on the July 5, 2017 Council agenda.

Additional Municipal Infrastructure
A list of additional municipal infrastructure projects were identified that would have normally been scheduled through departmental budgets to be integrated with the HuLRT project. These include:
• Incorporating municipal storm sewer (new and upgrades)
• Incorporating uninterrupted power supply or backup systems at all or primary signalized intersections
• Including noise walls that are not a requirement of the HuLRT Project but still meet the criteria through existing municipal policy
• Protecting for variable message sign systems within stop platforms to communicate MiWay information

As agreements are finalized through the procurement process, budget approvals will be required by respective service areas during the 2018 budget cycle.

Procurement Update
Infrastructure Ontario (IO) is leading procurement and Metrolinx is leading implementation of the HuLRT Project. The project is funded by a $1.4 billion capital commitment from the Government of Ontario. Since the previous update, IO began the procurement process with the release of a Request for Qualifications in October 2016. The three short-listed consortiums were announced by IO on June 6, 2017.

Metrolinx and IO anticipate the release of the Request for Proposals (RFP) in the summer of 2017.  The HuLRT Project procurement process is anticipated to be completed mid-2018 with a contract award to the successful consortium. Construction is expected to begin later that year. The successful consortium is expected to complete construction and testing by the end of 2022 and will then be responsible for the operations and maintenance of the system for the duration of the 30-year contract.