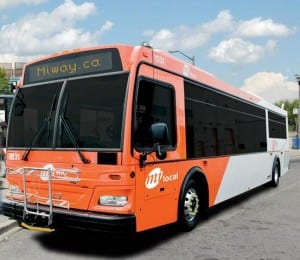 On May 1, some MiWay fares will increase while cash, student and child fares remain the same.

“Some MiWay fares are increasing to offset the cost of system enhancements and maintain the sharing of transit costs between riders and taxpayers. MiWay remains an affordable transportation option in Mississauga with fares that compare to other Greater Toronto Hamilton Area transit systems,” said Geoff Marinoff, Director of Transit. “About 50 per cent of our customers use PRESTO as their choice of fare payment and we continue to encourage this transition to PRESTO with more PRESTO choices beginning on May 1.”

* $1 Senior cash fare in effect during off peak hours, weekends and holidays) – under Council Review (see Seniors’ One Dollar MiWay Ride Extended into 2016)

Marinoff added that MiWay continues to invest in creating a transit-oriented city through the transition to using PRESTO as a fare payment option; more efficient service on the Mississauga Transitway – the City’s east-west dedicated bus corridor; and the  implementation of  MiWay 5 – a five year service plan that shifts the City’s transit network to a grid system.