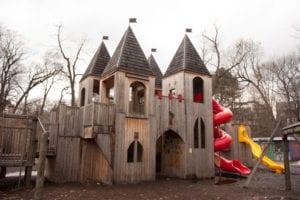 If you live in or around Malton, you’ll probably be happy to hear that big plans are in the works for Paul Coffey Park (formerly known as Wildwood Park).

The newly-renamed park (it was named after the Malton-raised hockey legend when the Malton Arena was also given his moniker) will, according to an earlier post by City Councillor Carolyn Parrish, soon be home to “a glorious new playground of enormous proportions, right beside the arena.”