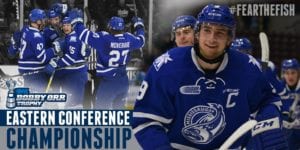 Your Mississauga Steelheads are on a roll and they need your support as they take on the Peterborough Petes for the Bobby Orr Trophy and the Eastern Conference Championship. With a strong end to the regular season, the Steelheads have already beaten the Ottawa 67’s and the Oshawa Generals to reach the Conference Finals. New Jersey Devils prospects Michael McLeod and Nathan Bastian, as well as NHL Draft eligible Owen Tippett and Nic Hauge, headline a Steelheads team hungry to bring a Championship home to Mississauga.

Tickets are on sale now for as low as $20 – click https://www.ticketmaster.ca/Mississauga-Steelheads-tickets/artist/1753776 –

Hope to see you at the Hershey Centre to Pack the Pond !!