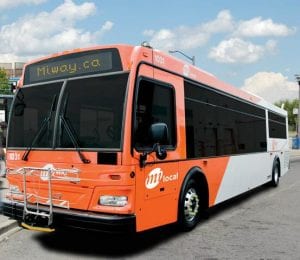 Today at General Committee, MiWay’s proposed Affordable Transportation Pilot Program (ATPP) was approved in principle by Mississauga City Council and is on its way to becoming a permanent program in January 2018 along with the Senior One Dollar Cash Fare at off-peak times. Final approval is to follow at the October 11 Council meeting.

“Making the affordable transportation program permanent assists residents with low incomes and gives them better access to employment and services,” said Mayor Bonnie Crombie “This program contributes to the City’s strategic goal of ensuring affordability and accessibility. The social and financial return on investment from this program benefits our City and helps keep our communities strong.”

“The two phases of the affordable transportation pilot helped us develop the program and make it effective,” said Geoff Marinoff, Director of Transit. “City of Mississauga and Region of Peel staff recommend that the phase two pilot becomes a permanent program for eligible Mississauga residents. The Region will continue to assess the eligibility and MiWay will administer the issuance of PRESTO cards. Financial responsibilities for subsidy and administrative costs will be covered by the Region. MiWay will continue to make the Senior One Dollar Cash Fare available at off-peak times.”

The permanent affordable transportation program is to be based on the phase two pilot that had 1,300 participants. The pilot was a partnership between the Region of Peel and MiWay and available to low-income residents in Mississauga as defined by the Low Income Measure Household Thresholds for a one year period. Approved participants were provided a specially configured PRESTO card allowing them to purchase a MiWay monthly pass at a 50 per cent discount. In January 2018, priority would be given to eligible participants who remained active during phase two of the pilot.  New participants would be accepted in February 2018. For details visit the Region of Peel website.

The MiWay Affordable Transportation Pilot Program was a partnership between the City of Mississauga and the Region of Peel. Mississauga residents earning an income below the Low Income Measure (LIM) thresholds were eligible to apply for a subsidy of 50 per cent off of a MiWay monthly pass by visiting the Region of Peel website.

Responsibility for permanent program delivery would continue to be shared between the partners. The Region will retain responsibility for screening applicants for eligibility, funding the fare subsidy, and administrative costs. MiWay will assume responsibility for PRESTO card administration and transit service delivery. Peel Regional Council and the City of Mississauga approved the MiWay Affordable Transportation Pilot program following a successful phase one, which was in place from September 2014 to August 2015.  Results of phase one found that the program allowed residents with limited financial means to access employment and community services. The results of the phase two Affordable Transportation Pilot in place from May 2016 show that for every dollar invested, the social return on investment is $3.98. The results also showed evidence of participants accessing various services in the community.

The Senior One Dollar Cash fare at off-peak times will become permanent following approval at Council on October 11. In June 2015, MiWay began offering a one dollar cash fare to seniors during off-peak hours as a pilot program approved by City Council. MiWay has continued to promote this program through its website, at seniors’ events, posters on buses, at the City Centre Transit Terminal and transit operators educate senior riders about the availability of the one dollar seniors fare during the off-peak times. On request, senior riders (age 65+) must present a piece of valid photo identification or a MiWay issued senior identification card to the bus driver to receive the one dollar fare.