Restoration of CF 100 on Derry Road 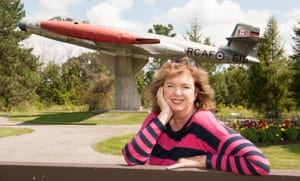 The Heritage CF 100 was built by Avro and is currently situated on a pedestal on Derry Road beside the renamed Paul Coffey Park (formerly Wildwood Park) in Malton.  It has been displayed as part of the aeronautical history of Malton for over 50 years. It’s one of only 3 still displayed on concrete pedestals in Canada. Others are in war and airplane museums.

Our CF 100 is particularly significant because it was manufactured in Malton. It has been slowly deteriorating over the years because airplanes were made to fly or to rest on the ground with their weight distributed over their landing gear, rather than perch indefinitely on a concrete and metal pedestal.

A CF 100 in similar distress was reinforced, refurbished and repainted by Jim Hurlburt & Sons Heritage Metal Restoration in Haliburton 5 years ago for about $60,000. We have contacted them and they are happy to take on the supervision and design for our restoration, and work with volunteer labour if we can provide it, to keep down costs.

The City was investigating moving the jet to Hamilton but the community was upset at the prospect. As the local Councillor and a Heritage buff, I’ve taken on this project which will include fundraising and organizing skilled volunteer labor.

Joe Iannelli and Mike McCarthy from Mitsubishi Heavy Industries (Canada) Aerospace both grew up in Malton and are offering skilled labour for the project.

Some of the founding families of Malton have a strong interest in preserving our aerospace heritage. Ann Barclay, whose grandparents and parents, the Codlins, owned one of the original farms and eventually worked in the aerospace industry, started off the fund with a $5,000 donation. The Malton Business Improvement Association (BIA) is managing  the funds raised for the project.