What do you think about the Malton arches? 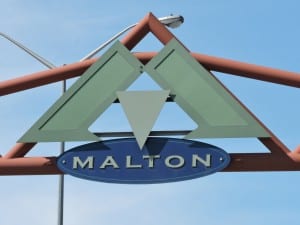 As your new Councillor, I would like to ask for your feedback on the archways that cross Airport Rd. at two locations.

I have heard from many residents who would like to have the archways that cross Airport Rd. at two locations removed. When the planned traffic light is installed at the intersection of Drew Rd. and Airport Rd., the arches could be removed at the same time at no cost.

For background, the arches were constructed when Cliff Gyles was Ward 5 Councillor. He fundraised from local businesses to have them built and since then they’ve been maintained by the Region of Peel. The marking in the centre is apparently a Masonic symbol.

I sent a letter to Malton residents asking for their feedback on the arches and have had lots of calls so far. One of the most common concerns is that the arches identify Malton, and that if they’re removed there will be nothing to mark the village. I’m working on a series of revisions to the Malton area, including signage and decorations to ensure that Malton is recognized.

I’m also considering adapting the arches to better reflect the community – perhaps with flags, maple leaves or airplane sculptures. In fact, I’ve been in contact with a metal arts instructor at Sheridan College who could make the arches redesign a project for a star student.

Do you think it’s a good idea to remove the arches? Would you like to see them redesigned? Or should they remain as they are on Airport Rd? Let me know by emailing Carolyn.Parrish@Mississauga.ca or calling 905-896-5500.